Notes from the CRB - April Edition 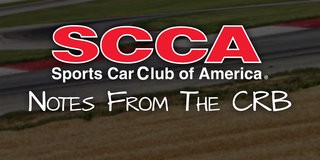 People always have questions about what the Club Racing Board (CRB) does and how it operates. One frequently asked question is: What are the roles of the Board of Directors (BoD), CRB, Committees and National Staff when it comes to SCCA Road Racing?

To answer this question, let’s take a look at the Club’s structure. The BoD is elected and charged with oversight of SCCA affairs. The BoD exercises its responsibilities by acting primarily as a policy-making body.  It is the only body which may establish or change SCCA policies.

Each December, the BoD appoints a CRB Chairman and two to eight additional SCCA members to the CRB. This body establishes rules, specifications and standards for scheduling, organization, conduct and supervision of Road Racing programs. The CRB communicates with the SCCA Road Racing Department to ensure rules and procedures mesh smoothly to benefit programs and participants.

Each CRB member has liaison responsibilities for specific Committees consisting of CRB-approved members appointed by the Committee’s Chairman and existing committee members. Subject to annual appointment by the CRB, Committee members serve three to six years.  The number of and purpose for each committee is up to the CRB’s discretion. These Committees review member input and recommend potential actions to the CRB.

When it comes to rule changes and car reclassification, suggestions developed by the CRB must be approved by the BoD. If approved, the rule becomes effective January 1 the following year. There are, however, a number of actions the BoD can take, based on CRB input, throughout the year. Competition adjustments to balance a class can occur at any time, but every effort is made to limit such adjustments during a competition year. There is an exception to this rule for cars in their first year of SCCA competition. Newly classed vehicles may require adjustments to rim size, springs, shocks and bars during the competition season for the greater good.

Changes in regard to weight, tire size and/or the diameter of air intake restrictors can be made up to July 1 each year by the CRB without BoD approval. Other than these specific competition adjustments, spec line items are subject to the rules change process involving the BoD. Don’t forget that weight and induction changes may be considered a rule change if applied to a mature class or one with restricted specification. And of course, safety can be addressed at any time.

There are a limited number of changes the CRB is authorized to make on its own. Those actions include: 1) Clarifying a rule characterized as adding/subtracting/changing language to reinforce the intent of the rule without changing the core definition. 2) Make specification changes focused on weight, tire size and air/fuel management. 3) New classifications. 4) Implement changes for classes where parts are no longer available and a shortage would negatively impact competition.

The Club’s whole system is set up with checks-and-balances while also being nimble to address urgent matters. If you have concerns, find the appropriate Committee and make your concerns known. If things don’t go your way, please don’t take it personally. Your CRB is doing its very best to serve the greater good. And if we accidently get it wrong, there’s a system in place to make corrections.