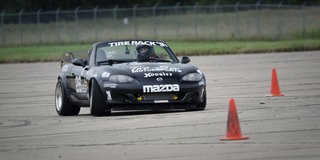 Lacie Edens isn’t one to sit on the sidelines or let someone tell her she “can’t.”  Her very first runs in an autocross car came in the BSP MazdaSpeed Miata she currently co-drives with her husband, Chris Edens.  In the wet.  On Hoosier A7s.  Lacie is also one of the three well-deserving 2019 Wendi Allen Scholarship recipients. She is the daughter of Wayne and Donna Barkley, and grew up in Hot Springs, Arkansas. She played college basketball for Arkansas State University until she suffered a career-ending injury.  She spent the following years traveling the country until she met her husband in 2014.  The Edens currently reside in Little Rock, Arkansas.

JH: Straight away, congrats on being chosen as one of the recipients of the Wendi Allen Scholarship award. I imagine that was extremely exciting news to get.  How did you find out, and what was your initial reaction?

LE: I had received an email from Howard Duncan in which he made sure to mention that I wasn’t in trouble, but he was hoping I could call him back. I was a little nervous about the call, but once he had informed me of being a recipient, I was really excited and just super honored to be nominated by all the women I look up to!

JH: How did you first get into autocrossing? Were motorsports, or cars in general, something you were into beforehand?

LE: Yes, I was into cars and racing.  Both my parents raced oval dirt tracks when I was growing up, and my brother started autocrossing about 15 years ago, so I was already around it. In 2014, I became a member of the SCCA with the intention of learning how to autocross, as I had grown tired of sitting on the sidelines watching while others participated.  Not long after, I asked my then-boyfriend-now-husband, Chris, to let me drive his “little car.”  His little car being his BSP MazdaSpeed Miata.  That event happened to also be in the wet.  And the car was on A7 Hoosiers. That day I had the time of my life!  And in the fleeting moments of keeping the front of the car ahead of the rear, I knew that I wanted to become a competitive driver.

JH: Many of us often preach that the best way to start autocrossing is in a fairly stock car, and on street tires, as sticky tires and suspension mods can hide driver issues.  Knowing what you know now, would you still elect to start off in a BSP car on sticky tires?

LE: I wouldn’t change it at all.  Mainly because I am stubborn!  There were quite a few folks locally saying that the BSP car was too much for me, and I wanted to prove them wrong! But I did get a Miata as a daily and decided to run it in ES locally for a while, which really helped me understand and work on momentum driving.  Now, because of the experience of driving both the BSP car and the ES car, I feel I can hop in almost any car and be fairly quick right away. Starting with the BSP car was my path. But I am not sure I would recommend it to others. 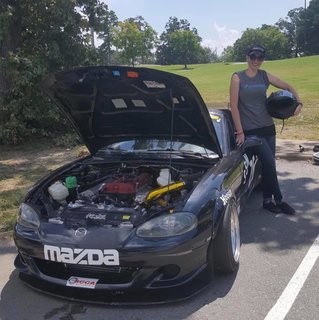 JH: With the Wendi Allen Scholarship being for new or up-and-coming women in autocross, talk to me about being a woman in our sport.

LE: Locally it was a bit more difficult to be taken seriously. Whenever I would beat the guys, especially in the ES car, there would always be a reason other than my talent, which is frustrating.  But nationally, I always felt welcomed and embraced.  And I think that is because of all the really great women drivers that have paved the way.  So, locally I help teach novices now, which I feel continues to help change the perception of women in motorsports.

JH: With that thought in mind, is there anything you would tell the other ladies out there that are on the fence about trying autocross?

LE: Don’t be afraid to beat the guys!