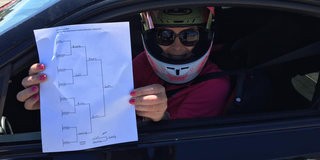 The 2019 Tire Rack SCCA® ProSolo® season is hitting its stride with the second event of the season taking place this weekend in Fontana, CA. While many competitors had just been at Crows Landing the previous weekend, there were many new faces as the series moved South. The differences in surfaces and available space between the two sites meant that the standings were shook up across the board.

One of the more interesting battles was found in Street Touring Ultra between the BMW M2 of Matt Ales and the Mitsubishi Lancer EVO of Jimmy Au-Yeung. Ales led early, but as Au-Yeung dialed in the EVO, he was able to find the time to take the win by a mere 0.099 second. The AWD of the EVO gave Au-Yeung nearly a 0.4-second advantage in 60-foot times alone.

Street Touring Xtreme was the example of consistency between the two California ProSolos as Mack Tsang came up big on his last left-side run to take the win by 0.107 second over Manfred Reysser. The class was full of the twin Subaru BRZ and Scion FR-S, except for lone wolves, like Marshall Grice’s BMW 325is. While Michael Yanase and Terence Chang claimed the third and fourth trophy positions respectively, Grice snuck his odd duck into the fifth and final trophy position.

In Street 4, Ido Waksman flew in to co-drive with Shane Donahue in the twin to his own BMW M3 that he piloted to a second-place finish just a few weeks ago at the Charlotte Championship Tour. On Saturday, Waksman struggled with cones and red lights on the left but was able to clean it up and jump from outside of the trophies to third place on Sunday, 1.385 seconds behind Chris Thorpe in a Volkswagen Golf R. Ryan Otis took the win in the Ford Focus RS while Kaustav Acharya and Trevor Brown rounded out the trophies in fourth and fifth respectively.

Last weekend, Annie Gill worked hard for a trophy position in her own Civic Type R in Ladies Class 2. This week, she jumped in a Ford Fiesta ST and jumped to an early lead. While she couldn’t improve on her left side runs from Saturday morning, it was enough to take a 0.686-second victory over Shauna Rios. Lacey Otis and Meredith Brown claimed the third and fourth trophies respectively while Crows Landing winner, Shelly Monfort, claimed the final trophy in fifth. All five trophies were covered by just over two seconds, showing the competitiveness of this 15-driver class.

The six Formula Junior competitors showed the adults how it was done both on and off the course. In FJA, Erika McKee took the early lead, but on his last two runs, Ethan Fudge found the time to recover from the staging issues that plagued him Saturday to take the win. In FJB, Alana McKee took the win, but it was Samuel Otis who showed us all what sportsmanship is by walking over to Alana to congratulate her on the win after their runs on Sunday morning.

In the Ladies Challenge, Kate Fisher capitalized on her second seed position to take the Challenge win over top seed, Annie Gill. Ryan Otis kept his success rolling from S4 to take the Super Challenge win. In the Bonus Challenge, Steve O’Blenes emerged on top to take home a free event entry.

You can view complete results from this weekend’s 2019 Tire Rack Fontana ProSolo here.