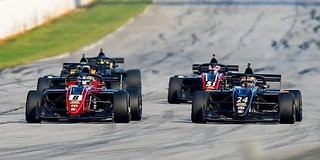 The debut of the F3 Americas Championship Powered by Honda introduced the next generation chassis for the Formula Atlantic class in SCCA Road Racing competition. In an effort to attract drivers who are looking to maximize their racing opportunities with a cost-effective competition package that doesn’t sacrifice safety, speed or style, the F3 Americas program developed a new contingency program targeted to drivers age 35 and over. With more than $15,000 in cash and prizes available, the Masters Cup contingency package will award top drivers who are at least 35 years old with cash prizes at each event. The Masters Cup points-leading driver at the end of the season will receive the Masters Cup Champion contingency prize package.

“The Ligier JS F3 chassis is a fantastic opportunity for drivers to not only participate with the F3 Americas Championship, but continue racing with Formula Race Promotions or run at the SCCA Road Racing regional or national level.” Sydney Davis Yagel, SCCA Pro Racing General Manager said. “Our goal with the Masters Cup is to provide a platform for drivers to get the most out of their investment by giving them multiple on-track participation opportunities.”

The SCCA National Championship Runoffs will offer Masters Cup drivers another opportunity to compete in their Ligier JS F3 race cars. Drivers can use two of their F3 Americas starts to count toward qualification for the National Championship Runoffs® event at VIRginia International Raceway. A top three finish at the Runoffs qualifies drivers for additional contingency awards from SCCA Pro Racing and its F3 Americas partners.

At the conclusion of the season, the top-three F3 Americas Masters Cup drivers who have accumulated the most points will be awarded trophies and a contingency package at the Champions Banquet in Austin, Texas, on Nov. 3. While the full end-of-season prize packages are still being developed, the SCCA Pro Racing has determined the following cash contingency amounts.

From the Ligier JS F3 chassis to the 303-horsepower Honda Performance Development version of the new Honda Civic® Type R® turbocharged K20C1 motor and the Hankook tires designed specifically for the series, the car is completely made and assembled in the United States. The F3 Americas’ teams race chassis that meet the most current global FIA safety specification, including the first North American application of a race car Halo. Affordability is a key component to this single-engine, single-chassis spec competition with the full package meeting the FIA price-cap of $134,000.

About Honda Performance Development:
Honda Performance Development, Inc., (HPD) is Honda's racing company in North America and is a wholly owned subsidiary of American Honda Motor Co., Inc. Founded in 1993, HPD is the technical operations center for Honda's high-performance racing programs. HPD specializes in the design and development of race engines, chassis and performance parts, and technical/race support. HPD also offer parts and race support to Honda and Acura grassroots motorsports racers, and are expanding its support of racing series and programs that make Honda racing products available to all racing styles, from karting and Quarter Midgets to the highest levels of pro racing. hpd.honda.com

About Hankook Tire America Corp.:
Hankook Tire America Corp. is a growing leader in the U.S. tire market, leveraging investments in technology, manufacturing and marketing to deliver high-quality, reliable products that are safer for consumers and the environment. Headquartered in Nashville, Tennessee, Hankook America markets and distributes a complete line of high-performance and ultra-high-performance passenger tires, light truck and SUV tires as well as medium truck and bus tires in the United States. Hankook Tire America is a subsidiary of Hankook Tire Co., Ltd., a Forbes Global 2000 company headquartered in Seoul, Korea, and led by President and CEO Hyun Bum Cho.