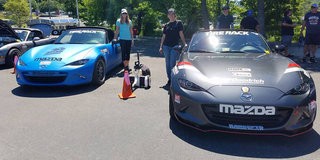 After two days of competition at the Tire Rack Bristol Match Tour, competitors stuck around Bristol Motor Speedway for another two days of SCCA Solo® action at the Tire Rack Bristol Championship Tour. As the weekend wore on, attrition hit hard, but the comradery of SCCA came out in spades. So that drivers could continue competing, Cindy Duncan’s F Street Mustang came in as a relief vehicle for several. It was used in four classes by eight different drivers. Cindy’s generosity allowed drivers to complete their weekend and have some fun despite the mishaps.

On the first runs of day two competition, Johanna Foege suffered fuel problems in her ESP Mazdaspeed6 and she switched to Duncan’s Mustang for her third. Foege’s first run taken in the Mazdaspeed would prove to be enough to win ESPL, with Duncan herself finishing 2nd in a borrowed Ford Shelby GT500.

Jennifer Bedell showed up to Bristol with her new 2015 Scion FR-S, freshly prepped for SSC and still sporting temporary plates. In SSCL, Co-driver Chris Peterson led after day one, but Bedell fought back for the win in the 5-driver class.

All three trophies in A Street were won by blue Chevrolet C5 Z06 Corvettes, with the top two spots taken by codrivers John Wolf and William Bostic, with just 0.122 second between them. Cody Hunt followed in third, 0.682 second back from Bostic.

To break up the similarities, the two trophy-winning Mazda Miatas in Street Touring Sport couldn’t have been more different. Jacob Ronald’s winning car, affectionately named “Tetanus” for its natural appearance, was a stark contrast to second place Patrick Mayne in an extremely clean 1992 Sunburst Yellow edition. Ronald’s margin of victory was a commanding 1.266 seconds.

In Street Touring Xtreme, Kyle Herbst was on fire all weekend, taking wins in both the Match and Champ Tours. The margin back to Raymond Dsouza in second was 2.142 seconds, but Brian Karwan was just 0.005 behind for the third and final trophy.

B Street Prepared brings us back to a slew of mechanical issues throughout the event, with the top two cars in class both needing work late into the night after day one. The flat and level space between the two bathrooms in paddock provided a place for on-site suspension and alignment fixes. Gregory Hahn took the win, with Buckie Maxey 0.791 second behind in second and Heath Pemberton another 0.713 second back in third.

In C Street, DJ Alessandrini put together a flyer on run three to come back from a small day-one deficit for the victory over Andrew Pallotta by 0.098 second. Dennis Barrett, Charles Krampert, and Chris Harp filled the remaining trophy positions.

CAM Contemporary was a tight battle with Jadrice Toussaint and Randy Adkins separated by just 0.043 second leading into final runs. Toussaint’s Mustang hit the stage cone while launching, leaving the door open, but Adkins only managed to improve by 0.001 second on his final run, resulting in the final gap between them being just 0.042 second.

Complete results from the 2018 Tire Rack Bristol Championship Tour can be found here.