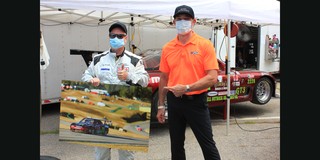 When Jeff Dernehl claimed the inaugural GT-3 Challenge presented by MPI championship back in 2019 after winning a regional GT-3 Challenge event and then the SCCA® National Championship Runoffs® race at VIRginia International Raceway, bestowed upon him were a couple beautiful trophies and lots of accolades. This past Friday at Michelin Raceway Road Atlanta during a Hoosier Racing Tire SCCA Super Tour weekend, Jeff collected his final reward for earning the championship: Tutelage from pro driver Max Papis.

“I’m amazed by their attention to details,” Max said while gazing at the GT-3 machine. “The car is beautiful. All the welds are incredible. I’m not surprised they won the championship. The way they hold the splitter up, the ride-height control, the data they run, the details are very well documented.”

That’s high praise coming from someone with a pedigree that includes Formula 1, IndyCar, IMSA, Grand-Am, IROC and NASCAR competition.

“The main reason why I decided to get involved with SCCA and the GT-3 Challenge is because it’s pure,” Max continued. “It’s a very good form of racing. The cars are somehow sophisticated enough that you can put some ingenuity in it and they’re not just pure spec cars.”

The GT-3 Challenge presented by MPI is a series boosting participation in the GT-3 class and is supported by Mazda, Max Papis Innovations, Penske Racing Shocks, AiM Sports, Hoosier Racing Tire, Goodyear Tire, Ave Motorsports, and Bell Racing Helmets. The series is in its second season with another champion slated to be crowned this October at Road America during the 2020 SCCA Runoffs.

After completing reconnaissance of the car, Max and Jeff began to chat on numerous subjects. Max refused to call the interaction “coaching” in the classic sense. Instead, he referred to his input as “advisory,” understanding that Jeff has years of experience with the Mazda RX-7 that began its competition career as an E Production race car.

“A guy like me will not be able to gain Jeff two or three seconds. It would be more in tenths of a second or more in understanding why you do certain things,” Max commented. “There is not much you can teach him in terms of pure speed because he already has the right instincts.”

That being said, Max did offer up an interesting concept when it comes to achieving a fast lap time on any track anywhere in the world.

“People always focus on a fast corner, but you might be in that corner for only three seconds. What you can gain there are tenths of a second,” he said. “In a low-speed corner, you might be in the corner for six to eight seconds. What you can gain there is half-a-second in time. So, we look at when to focus on speed and when to focus your attention on details.”

Throughout the day, Jeff and Max talked about car setup, reviewed in-car video and analyzed data from the comfort of an air-conditioned camper. The interaction left Jeff in awe.

“I’ve watched professional, successful athletes. I’ve observed their demeanor and how they go about things. There is always a similar thread to those people,” Jeff said. “You can feel that you’re in the presence of someone special. And that’s how I felt today … with his effort, excitement and enthusiasm.”

“On a cool level, 1 to 10, this was a 15,” Jeff continued. “I’ve got to thank him for coming and doing what he’s doing. To get this kind of attention for a little guy like me that’s doing SCCA Club Racing, it made me feel like a bigshot. Made me feel like a pro. It was an absolute pleasure and something I will never forget.

While hanging out with a well-known and well-respect pro driver for the day was plenty exciting, Jeff also found the sage advice offered by Max to be thought-provoking and an intriguing approach to driving a race car.

“His knowledge is incredible,” Jeff said. “I’ve been trained by some very, very good people. It’s a different experience in that they were very technical. But Max takes a different approach. It’s more of a way to think … an all-encompassing view. Once you get there and start doing what he’s explaining, it puts you at a different level. It’s a different experience that I almost can’t articulate. It’s a mindset. A way of viewing things in a different fashion. It’s having your car, your body and your mind all work together to accomplish something you really didn’t think you could.”

Max Papis Innovations (MPI) -- developer of steering wheels, seats, racing suits and other accessories for both motorsport and marine applications -- was founded more than a decade ago by Max after competing in NASCAR and realizing an antiquated steering wheel was still in use. He worked with Hendrick Motorsports to design and develop a new steering wheel that was safer. Before that, he learned a bit about steering wheel technology while racing with Gianpiero Moretti, founder of MOMO. And while Max has a great deal of experience working with top-level racing programs, he was still absolutely thrilled to be in the SCCA paddock at Michelin Raceway Road Atlanta.

“This is kind of my background. I came from grassroots racing,” he said. “I love to see the passion they have. It’s very similar to my passion when I drove IndyCar. The way you go about the business is exactly the same. One is not bigger than the other.

“I want to tell all the SCCA drivers to maybe not call themselves ‘amateur,’’’ Max continued. “I see a lot of professional people here. And the approach they have is amazing. Pro is an attitude, and a lot of guys with the SCCA have that pro attitude.”

Even though conditions Friday were very warm, Max was unphased and could be seen standing upon a ridge overlooking turn one, carefully eyeballing Jeff’s championship-winning Mazda RX-7 as it traversed the course. The dedication and enthusiasm Max exhibited while attending SCCA’s premier road racing event impressed Jeff to no end.

“It just shows you how these people care. How they’re behind this whole GT-3 Challenge program to really, truly make it something special for people and get them involved, get them excited,” Jeff said. “If more people got out and ran this type of car, they’d know how incredible it is. I think a lot of people are getting interested in GT-3 again and building cars.”

To commemorate the day, Jeff received from Mazda a large, beautiful, aluminum-plated print of his car on its way to winning the Runoffs at VIR. The picture was signed by Max and will surely have a prominent position in Jeff’s trophy room or race garage. Just another perk to competing in the GT-3 Challenge presented by MPI.

The nine-race, 2020 GT-3 Challenge presented by MPI series continues in August during SCCA’s U.S. Major Tour® event at Road America, followed by a second August competition weekend taking place during the Hoosier Super Tour stop at Pittsburgh International Race Complex. The GT-3 Challenge will then crown its 2020 champion at SCCA’s Runoffs® in October at Road America.