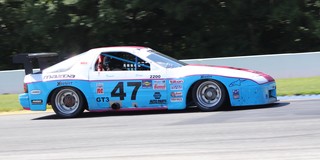 This is a unique Hoosier Super Tour weekend. Originally the series was slated to visit the Georgia track back in March. But the coronavirus pandemic made that impossible. However, SCCA’s Atlanta Region worked diligently to find a way to reschedule the visit for July. The result is a one-off event where Hoosier Super Tour car classes are sharing the circuit with South Atlantic Road Racing Championship regional car classes on Saturday and Sunday.

Opening Salvo: Spec Racer Ford Gen3 (SRF3) was the first race group to hit the track Saturday with temperatures in the low 90s. Robeson Clay Russell was on pole with Charles Russell Turner alongside at the start. Upon completion of the first lap, Russell was out front followed by Turner and Franklin Futrelle, two drivers with a proven performance record at Michelin Raceway Road Atlanta.

On lap four, Futrelle and Turner moved by Russell to take the first and second positions just before a full-course yellow came out. When the SRF3 field went back to green, only three racing laps remained. When the checkered flag fell, it was Russell back in the lead driving the No. 31 SVN/Angry LLama/Comprent SRF3 car.

“I started out front and had a little gap … but I knew it was only a matter of time until they caught up to me,” Russell said. “I was driving a little sloppy at first. Track conditions were a little hot and greasy, and I did not adjust my driving style accordingly. But seeing those two in front of me actually calmed me down and made me focus better on my driving line. I knew I was going to get them. I just hung back there until the last lap. It worked out.”

Kannard vs. Kamalian: F Production saw a good race Saturday as the Mazda Miatas of Ken Kannard and Michael Kamalian did battle. Kannard, in the No. 51 Northwest Cable Construction/Hoosier Racing Tire/G-Loc Brakes machine, led the event flag to flag. Kamalian, however, filled his rearview mirror and applied copious amounts of pressure to keep things interesting. One little slip and Kamalian was ready to pounce, but a full-course yellow and early end to the race robbed him of the opportunity.

“We had a great race,” Kannard said. “Mike Kamalian was behind me, but I was able to keep him at bay a little bit. I was hoping … we could have a little race at the end. But it is what it is. We’ll take the win.”

GT-3 Challenge Resumes: The GT-3 Challenge presented by MPI is a series boosting participation in the GT-3 class and is supported by Mazda, Max Papis Innovations, Penske Racing Shocks, AiM Sports, Hoosier Racing Tire, Goodyear Tire, Carbotech Performance Brakes and Bell Racing Helmets. The first and most recent GT-3 Challenge event of 2020 took place back in February during a Hoosier Super Tour weekend at California’s Buttonwillow Raceway Park. This weekend, the GT-3 Challenge was back on track Saturday at Michelin Raceway Road Atlanta.

Defending GT-3 Challenge champion Jeff Dernehl and his Mazda RX-7 moved to the class lead Saturday as the race began. He held that position until late in the race when gremlins struck, allowing Stacy Wilson to get by in his No. 47 Hoosier Tire/Mazda/Wilson Racing Mazda RX-7 for the victory.

“It’s always fun, of course, racing against Jeff,” Wilson said afterwards. “I was gaining on Jeff and thought I had a run on him, but I lost brakes. Then he started having problems and ended up breaking. So, we both suffered casualties.”

Another Day of Racing to Come: The Hoosier Racing Tire SCCA Super Tour isn’t done yet at Michelin Raceway Road Atlanta as a second round of qualifying commences Sunday morning followed by a set of 35-min./19-lap afternoon races. Be sure to follow all the action live at www.scca.com/live.