In Case You Missed It: 2018 Runoffs Recaps 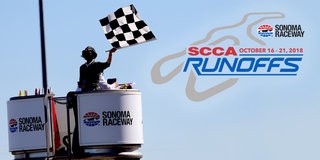 The 55th running of SCCA’s National Championship Runoffs® from Sonoma Raceway is now in the history book.  This was the very first time the SCCA® National Championship visited the 12-turn, 2.52-mile circuit located in California just north of San Francisco.  It’s safe to say the venue did not disappoint as it provided both stunning scenery and racing throughout the event.

In the next few weeks, on-demand videos from each race will be available to watch for free at SCCA.com. But in the meantime, below are recaps for each of this year’s 28 classes.

Start planning now for the 2019 National Championship Runoffs being held Oct. 8-13 at VIRginia International Raceway in Alton, Virginia. This will be the first time the Runoffs has visited that track located along the border of Virginia and North Carolina, and lots of SCCA members are already excited to participate in the event.

The Sports Car Club of America®, Inc., founded in 1944, is a 67,500-member motorsports organization that incorporates all facets of autocross, rally and road racing at both Club and professional levels. With headquarters in Topeka, Kansas, the SCCA annually sanctions over 2,000 events through its 116 Regions and subsidiary divisions. Much of the SCCA’s activities are made possible with support from the following Official Partners: Chevrolet, the Official Truck of the SCCA; Hawk Performance, the Official Brake Products of SCCA; Mobil 1, the Official Oil of SCCA; Sunoco, the Official Fuel of SCCA; and Tire Rack, the Official Tire Retailer of SCCA. To learn more, please visit www.scca.com.