Drennan Walks Away with Win in Spec Miata at Runoffs 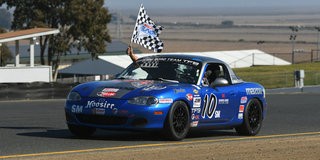 SONOMA, California (October 20, 2018) – The largest Runoffs field this year, the nearly 50-car Spec Miata (SM) class was led to the green flag Saturday by a Trans Am 455 Super Duty, the Official Pace Car of the 55th SCCA® National Championship at Sonoma Raceway.  After that, Mark Drennan led the field for the next 20 laps to the checkered flag.

Drennan, of San Jose, California, qualified second but got a great start, moving around pole-sitter Ken Sutherland, in the No. 94 Wyatt Fire Protection/Miatacage.com Mazda Miata, before Turn 2. Wasting no time, he immediately started gapping the competition. Drennan, piloting the No. 10 TFB Performance/WRR Mazda Miata, didn’t put a wheel wrong the remainder of the race, cruising to his first Runoffs victory.

“I’m just so happy it finally came true. I’ve been waiting a long time for this,” Drennan said. “This is my track, this is my home. I’m going to win in my house, and that’s exactly what happened.”

Tristan Littlehale, in his No. 8 TC Design Motorsports/Red Line Oil Mazda Miata, started sixth -- but took only five laps to work his way into third place. On lap six, he made a strong dive into Turn 11, slipping past Sutherland for second place. Littlehale ran wide into the dirt in Turn 2 on lap seven, but managed to hold on to it and not lose any positions. For the remainder of the lap, Sutherland continued to harass him nose to tail, but eventually Littlehale pulled away to a comfortable margin he maintained for the remainder of the race.

Littlehale explains, “Mark says this is his track, but it’s also my track. It was really clean racing out there. I was trying to chase after Mark but had to dial it back because we were struggling with the car a little bit.”

As Drennan and Littlehale slowly gapped the field, as many as six cars behind them battled for third, with it eventually going to the No. 28 X-Factor Racing/Sunoco/G-Loc/Mazda Miata of Chris Haldeman. After starting fifth and running as high as third, Haldeman found himself back in fifth on the last lap. After a hard push, including a four-car battle to the flag, Haldeman earned himself a spot on the podium.

Fourth went to Justin Casey in the No. 185 SBGarage/HaagPerformance/MiataCage Mazda Miata. Preston Pardus, in the No. 42 Danus Utilities/5X Racing/ESR/PR Mazda Miata, took fifth.

The Sunoco Hard Charger award went to David Biggar, in the No. 57 NBC 4 Los Angeles/Vintage Point Mazda Miata, who started 40th and finished in the 28th position.