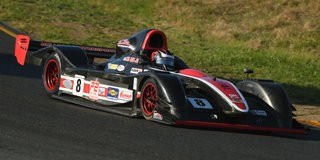 Day explains, “Bona got by Pancea and was reeling me in, but my guys on the radio are awesome and they were telling me what the gap was and where I needed to be to maintain the gap.” Day turned up the wick, running a pace that kept Bona from threatening a pass.

Shafer battled through an eventful week that included switching cars and tires. Even with all the changes in equipment, Shafer clawed to within a few seconds of Day after both Bona and Pancea spun out of the race.

Shafer describes the action, “Pancea and Bona pulled away from me in the first few laps, but I closed the gap on them. I was inside Bona and he was inside Pancea as we came through Turn 11 and Bona pushed a little wide and spun Pancea. Then four or five laps later Bona spun in the same spot.”

After missing qualifying, Perry Richardson was granted a mechanical hardship start at the back of the grid in 19th position. His march through the field started at the green flag and he moved up to 14th on the first lap. He climbed steadily through field until he reached third on the last lap, earning the Sunoco Hard Charger Award in the No. 169 Casino Fandango/Briggs Consulting Stohr WF1 Suzuki by gaining 17 positions.