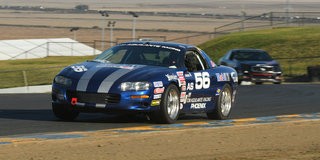 Heinricy – in the No. 56 Hoosier/Hawk/Mobil Chevrolet Camaro, put in a flawless drive for his 14th career National Championship and now trails only Jerry Hansen’s seemingly unapproachable record of 27 titles.

The early stages of the race set up Heinricy’s run to the title. Tire Rack pole sitter Andy McDermid lost a right rear on lap 5 and was forced to retire, handing the lead to Drew Cattell with Heinricy not far behind.

Cattell started the race third on the grid in the No. 27 Hoosier/G-Loc/AEM/Hagan Cadillac CTS-V, but managed to vault in front of Heinricy on the first lap. After McDermid’s retirement give him the lead, he drove a smooth and precise race with Heinricy filling his mirrors.

Heinricy consistently pressured Cattell for the majority of the race, never more than a few car lengths back. Cattell’s armor eventually started to crack, occasionally losing grip in corner entrances and exits. Cattell drove defensive and clean lines, but eventually Heinricy’s speed was too much to hold off. On lap 15 of 20, Heinricy finally pounced, braking as late as possible into turn 11. Cattell, realizing the inevitable, left the door open for Heinricy to make a clean pass.

“It was pretty textbook for me and being in third place I could see with the dicing up front that I had a chance if I kept the tires and brakes under me and as long as I could stay in touch, that was what I wanted to do,” Heinricy explained. “That’s what did it for me, really, just being patient and working the whole race and thinking about the end. I could have gone harder, but the car wouldn’t have lasted.”

But Cattell didn’t just roll over once he was passed. He pressured Heinricy for a couple laps.

“I thought I’d try to stick with him and pressure him, but didn’t quite have the speed to stay there in braking zones. I was hoping some lap traffic would come in at the end, but that didn’t work out.”

“I’m just super stoked and really happy to get up here and get a finish and a chance to thank everybody that’s been behind us. There are just so many people, especially my wife for rebuilding the transmission twice. I guess I need to learn how to shift better.”

Daniel Richardson finished third after starting fourth in the No. 15 Hoosier/GT/PAW/Auto Gear/Anze Chevrolet Camaro. “For the majority of the race I was sticking with these guys and trying to jump into the middle of it. I was ready to make some moves when the double yellow came out.”

Though he was driving through some minor transmission issues, he credits much of the day’s success to his car, “Everything else on the car was working absolutely incredible.”

Pratt Cole had a brilliant restart after the full course caution, but wasn’t able to maintain the positions he gained, finishing fourth in the No. 88 Hoosier/SVLLLC/Ford/Hawk Ford Mustang GT. Lynne Griffiths brought the No. 31 Comp Autowerks/Off Line Racing home in fifth position.

The Sunoco Hard Charger award went to Andy Schniedermeyer in the No. 117 Chevrolet Camaro who started 12th and finished seventh.