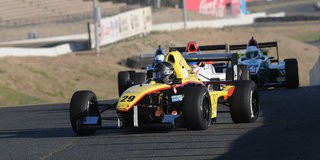 SONOMA, California (October 19, 2018) – Rarely are 15-year-olds zapped for energy. But after 20 laps on his way to an SCCA® National Championship Runoffs Formula Enterprises victory, Mark Snyder was a teenager in need of an energy drink.

It was well deserved, however, as the Southlake, Texas native led flag-to-flag from the Tire Rack pole to take a 16.379-second win in just his second Runoffs appearance. Justin Huffman and John Yeatman joined Snyder on the podium.

The win was a shared celebration, as Snyder’s twin brother, Liam, finished second in Formula Enterprises 2 during the multi-class race.

Snyder’s No. 29 Snyder Brothers Racing Formula Enterprises/Mazda led away from the green flag, picking up even more of a cushion when second-running Lee Rackley spun on lap 14. From there, it was just a matter of staying in the moment to pick up the checkered flag.

“I didn’t think I would be here on Tuesday night on the flight here,” Snyder said. “I had to go to school on Monday and Tuesday, and I looked at qualifying and saw it had gotten faster. We buckled down and kept the car where it was after testing.

“I got some sleep last night, and have been nervous all day. By mid-race, I heard ’18 second gap, just take it easy.’ I came around for the white flag and my last lap was one of my slowest. We crossed the checkered flag and I just heard extremely loud noises in my ears. That felt great.”

While Snyder ran alone, Huffman held off challenger after challenger in his No. 11 Cleverspeck Formula Enterprises/Mazda. Falling to fifth from third at the start, Huffman climbed back into contention and picked off positions one by one. Whether through attrition or passes on track, Huffman locked himself into third and was quicker than Yeatman in the final few laps of the race.

“The start of the race, I got a good jump at the green,” Huffman said. “But there was nowhere for me to go. It was going to end badly.

“By the end, John was coming for me. He was beside me a couple of times, but I was able to get a better run out of the critical corners to keep him back there.”

No one was as surprised as Yeatman when he landed on the podium after starting seventh. While he attributed much of that to others falling out of the race, Yeatman narrowly avoided the mechanical and self-inflicted pitfalls that others did.

The hairiest moment was chasing Huffman for second, when he spun in the Carousel. Even still, Yeatman recovered after his pirouette and brought the No. 8 Bulldog Motorsports/Gold Hill Racing Formula Enterprises/Mazda home in third. His climb from seventh earned him the Sunoco Hard Charger Award.

“I’m stunned,” Yeatman said. “I started in seventh, and it was quite a ways to third. There was a lot of attrition, so I’m sad I had to come through that. I had some good battles and I was working really hard for second but it just didn’t happen.”

Quinten Nelson started and finished fourth in the No. 112 Advanced Business Communications FE, while Jeff Read finished just behind in the No. 18 Fantasy Junction/Quantum Consulting machine.

Image: Mark Snyder becomes one of the youngest-ever Runoffs winner.