Cornet has His Way with Formula Mazda Field at Runoffs 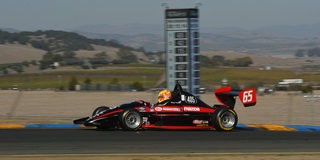 SONOMA, Calif. (Oct. 19, 2018) -- It was Bryce Cornet’s day on Sonoma Raceway’s 12-turn, 2.52-mile circuit as he handily took the Formula Mazda win in his No. 65 BryceCornet.com Star Formula Mazda. It is his first Runoffs® win in his first appearance at the SCCA® National Championship.

“This is a lot of fun,” Cornet offered after the race. “We’ve been working for this all year. I’m just super stoked.”

Cornet, from Norman, Oklahoma, started the race on pole and was challenged for the lead in the first turn by the No. 42 Star Formula Mazda of Mike Anderson and Jarret Voorhies’ No. 15 Mitchell Petroleum Star Formula Mazda. Cornet came out with the lead, but a car that spun at the rear of the field caused a full-course yellow, which brought out the pace car and bunched up everyone again.

On the restart, Cornet almost looked like he was caught sleeping as Anderson moved alongside and applied some pressure.  But Cornet held tough, then sailed away to a victory margin of nearly 19 seconds.

Behind Cornet, a four-driver battle developed between Anderson, Voorhies, Melvin Kemper Jr. and Bill Weaver. Voorhies, who started fifth, made a strong move to take third on the opening lap.  He filled up Anderson’s rearview mirrors for the first half of the race while Kemper, in fourth, did the same to him.  But Anderson ran clean and brought his car home in the runner-up spot, which is his seventh podium in eight Runoffs appearances.

As the race continued, Kemper fell away and left Voorhies unchallenged for the third finishing spot, his second Runoffs podium finish.  Because of his strategic move at the start of the race, Voorhies also earned the Sunoco Hard Charger award.

“I’m struggling at this track. It’s a little more aggressive than I tend to drive -- at least as the corners go,” Voorhies admitted after the race. “I was trying to catch Mike as hard as I could without making mistakes. I wanted to be on the podium at least if I couldn’t win the race.”

Kemper, driving the No. 1 Mazda/Goodyear Star Formula Mazda, finished fourth. But Weaver, in the No. 67 James G. Parker Insurance Associate Star Formula Mazda, and Nathan Ratton, in the No. 4 UNIFEYE Vision Partners machine, were elevated to fourth and fifth post-race when Kemper was moved to the back of the field for a non-compliant car.

Live, online video coverage of Runoffs races, presented by Mazda, is available throughout the three days of competition at SCCA.com/live. An audio race call, supplied by the Super Tour Radio broadcast team, is also available at SCCA.com/live, as well as live timing and scoring for each National Championship race.