Isley Wins Back to Back H Production Titles at the Runoffs 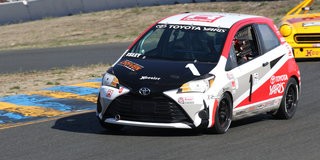 SONOMA, California (October 19, 2018) – Jason Isley and Brian Linn had captured the past three SCCA® National Championship Runoffs H Production races entering Friday’s showdown at Sonoma Raceway. When the pair qualified on the front row, side by side, the battle was once again on for supremacy.

When the dust settled, Isley’s No. 1 TRD/Hoosier/OS Giken/Racer.com Toyota Yaris crossed the finish line for his second gold medal in as many years, 13.254 seconds ahead of Linn’s No. 21 Hoosier/Carbotech/LINNSpeed MG Midget in a race that was much closer than the final margin of victory would indicate.

Linn was the Tire Rack polesitter and elected to start on the outside of row one, hoping to get a jump on the larger Yaris. But Isley used his newer Toyota to his advantage, moving in front of Linn through Turn 2 and setting the pace from the front of the field.

The early lead from Isley’s front wheel drive car had shrunk to nearly nothing, setting up an eventful lap 11. Linn tried a pugnacious pass, sliding to the inside of Isley and running side by side before being forced to give up the corner for the run down the esses. But under braking in Turn 12, Linn locked the brakes and spun.

Though Linn was still able to cross the stripe to complete that lap just three seconds behind, the gap was enough to give Isley a break and leave him in front to the finish.

The win gave Isley back-to-back gold medals to end the Toyota Yaris H Production project, which Isley has been in charge of since 2010.

“I really thought we came in here the underdog after the July race here,” Isley said. “Typically, we can race at about the same pace we qualify at, and I know those guys seem to give up just a little bit in their race setup. That was my only hope, was that it would come to me.

“It certainly helped my effort when Brian spun, and that took the pressure off. I wasn’t going to back down, but I didn’t have to go 110 per cent or do anything stupid and fry the tires.”

Linn, who was still more than a minute ahead of third place, felt like the door was still open after the spin. Even so, Isley’s gap continued to stretch, and Linn was resigned to second.

The silver medal was one of two shots at a championship that Linn has at this year’s Runoffs, as he busily swapped back and forth between his H Production and F Production car for qualifying all week – running both cars in each of the three 20-minute combined qualifying sessions.

“I figured Jason would get a jump going up the hill, and the strategy was just to keep the pressure on him,” Linn said of the green flag. “He gapped me more than I expected, and I thought ‘this is not working.’ Slowly, it started coming down.

“We went down into Turn 11, I looked inside. I made a mistake in my braking and looped it. I figured out what was happening pretty quickly and got it going. I felt like I still had a chance at that point if his tires went off, but he had a pretty good pace and drove the heck out of it.”

Valentine settled into third early in the race, and then kept just in front of the remainder of the field – save for the two front runners.

“It doesn’t get better than this,” Valentine said. “We showed up early for testing and we made a lot of changes. The car was not good when we got here. We got the car where we wanted it, and it was a pretty uneventful week. We didn’t have problems with the car, it was just making a few tweaks.

“We had a rough start to the year, and everything went wrong. It’s frustrating. We spent all summer working on the car, and here we are. We just kept at it.”