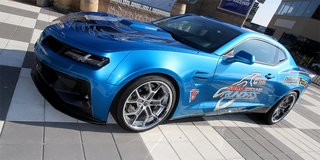 Reaching New Highs
A topic of conversation coming up a lot in the paddock at the 2018 Runoffs in California centers on “getting high.” Of course, we’re talking about track elevation changes at Sonoma Raceway located in the hills just north of San Francisco.

How serious is the elevation change? Well, there is 178 feet of difference between the lowest and highest points at Sonoma Raceway, and most of the climb is in the first three corners. From turn one to the apex of turn two, racers climb 104 feet. Drivers feel like Superman by the time they exit turn two having climbed the height of a 10-story building in 1,000 feet of track. Once they get to turn three they will have climbed 158 feet – enough to clear the height of the statue of liberty from feet to torch.

But for those who may have forgone sightseeing such objects or spent a lot of time in urban environments in favor of the racetrack, let’s see how Sonoma’s climb compares to some other elevation-enhanced sections of track across the country.

Trans Am Takes to the Track
The SCCA® National Championship Runoffs® and Trans Am® are two iconic motorsport entities distinctly linked to the Sports Car Club of America®. That is why it’s so fitting that 1,000-horsepower Trans Am 455 Super Duty vehicles, built by Trans Am Worldwide, are on hand at Sonoma Raceway to serve as the Official Pace Car for the 2018 National Championship Runoffs.

For those with a love of power and speed, the Trans Am 455 Super Duty comes with a lot of grunt in the form of 1,046 ft-lb of torque. Trans Am Worldwide Co-Founder Tod Warmack said that performance is the result of a collaboration with premier NASCAR engine builder Joey Arrington of North Carolina. Each car comes standard with a proprietorial engineered 455ci DI Motor, 2.9-liter Whipple Supercharger, upgraded fuel system, cold air intake, ceramic coated headers, three-inch exhaust with sport tips and an upgraded performance differential, Brembo Brakes and suspension.

Founded by brothers Tod and Scott Warmack along with Jim Dowling, Trans Am Worldwide collaborated with graphic designer Kevin Morgan to bring to life the vision of a modern-day Trans Am. To that end, the team secured exclusive rights to the Trans Am brand though SCCA and began to build cars for the public. The design has seen several refinements since the first prototype was produced, but it didn’t take long before demand outweighed supply and so came the time to transition from a small custom shop to a full production facility. Today, the company still has a passion for new and the classic Trans Am vehicles, but also converts restro-mods and restores classics, as well as offers new technology muscle cars with a classic retro look.

While the Trans Am 455 Super Duty looks great on track, those onsite at Sonoma Raceway can get an even closer look at this beautiful vehicle while it’s parked in the paddock at winner’s circle between on-track responsibilities.