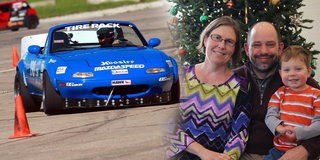 Neal Tovsen’s autocross career spans over 20 years, always paired with his wife and three-time National Champion, Katie Lacey. He's attended the Solo National Championships for the past 16 years, winning 12 trophies across GS, BS, STX, CSP, SM, and XP. He has developed and campaigned numerous cars, including a supercharged 1977 VW Scirocco for SM, a 1993 BMW 325is for STX, and a 2004 Mazda RX-8 for BS. He recently built his second CSP Miata, to which he acknowledges, “Nobody has ever accused me of making rational decisions about cars.” A driving coach/instructor for over 15 years, Neal also teams up with Shane Donahue to produce the ConeCoach Podcast.

JH: So, in 2009 you walked away from a “real” full-time job to start your own business.  What is it that you do, and what inspired you to do that?

NT: My Company is called Go Plaid, which is a simultaneous homage to the fact that I always wear plaid, which one of my clients would always give me a hard time for, and the movie Spaceballs. And what we do is provide custom software product development for startups and small companies. Primarily in the spaces of financial technology and “internet of things.” We are currently working with folks in Health Care and Clean Energy, as well as mobile apps for creative people. The reason I did it was to see if I could. I just felt like I wanted to control my own destiny. At the time, I didn’t know a lot of the things about myself that I do now. And I wanted to go push my boundaries.

JH: You have a podcast called ConeCoach. What is it, and when did it start?

NT: ConeCoach started off as a blog, is now a podcast, and is focused on the techniques and practice for going faster as an autocrosser, both physically and mentally. The physical side is the technical stuff, like suspension tuning and car setup.  The mental side is how to approach an event and how to go faster as a driver. As for when it started, gosh, I’m not entirely sure! Hmmm, I think it may have been the end of 2014, actually.  Like I mentioned before, it started of as a blog I was doing. But after a bit of time, I sort of fell of the wagon for a bit, so to speak. I got tied up in other things and the blog ended up getting a little stagnant. It was the combination of Kinch Reindl, who had been prodding me to keep it going, and Shane Donahue, who pitched the idea of turning it into a podcast, that got it up and running again. I had actually never really thought of doing a podcast before. But Shane had a bunch of experience with that sort of thing, and thought it would be really cool. So, we thought, “let’s give it a try!”  We’ve had a ton of fun doing them. So the transition to doing a podcast, that was all Shane. He really made that happen.

JH: What was the inspiration for it?

NT: The primary thing about ConeCoach that hasn’t really changed is that I wanted to create a place where you could go super deep on how to get faster.  Kinch’s podcast had a lot of good information coming out of the interviews, in that regard, but it wasn’t really the focus of what he was doing. It just wasn’t quite on target for what I wanted.  And then you had Grassroots Motorsports, and SoloMatters, and SportsCar that were doing technical articles, that to fit in the format, just weren’t deep enough for me.  They were great information, but I wanted to go deeper. So, we started doing the podcast with that in mind. We just wanted to geek out on all the details. Things like how to move your hands on the steering wheel -- and spend a half hour just on that subject and really dive down on it.  For SportsCar to do that, it would fill up half of the issue, which, obviously they can’t do.

JH: So, speaking of Kinch, and stealing one of his typical questions, what is the one autocross car you would most like to drive, if given the chance?

NT: There are three things I think about when asked a question like that. First, what is the freaking coolest car you could jump into?  And hands down, that is Ron Ver Mulm’s Camaro. There are other awesome machines out there, but that is the one that always comes to mind.  Second, what is the car that would be the most amazing autocross car? In my opinion, that would be an A Mod or B Mod.  If I could go buy, or build, a car that would rip up the course the fastest, the answer is, fairly obviously, one of those two types of cars.  And third, where is the competition?  And that is why I ended up going into CSP. It was kind of the sweet spot of a car that was really cool,a tool that was really sharp, and a talent pool that was really deep. When was it? I think it was in 2015, there were more National Champions entered in CSP than trophies to be handed out for the class. There ended up being a few National Champions that year that left without a trophy! That kind of competition, along with the build and car is what drew me to CSP.

JH: Knowing Minnesota doesn’t have the longest autocross season, is there any other way that you have found to satiate your appetite, so to speak, for competition besides autocross? And does it have a relationship to, or help with, your autocrossing?

NT: I haven’t done it for awhile, but I used to do a fair bit of RC racing. And it is 100 percent relatable to autocross.  There are really two things RC’s do for an autocrosser. The first is, depending on where you race, that they do switch up the track. It isn’t permanent, so you do have to be able to learn the new layout quickly. But more importantly, you plop this 16-ounce car down on the track, do a bunch of laps, then pick it right back up, take it back to a table, and make some major change to the suspension in 2-3 minutes, like springs or alignment, and have it make a huge difference on the car’s handling. So, it can really help you learn chassis setup. The second is the mental aspect. These cars are doing 30 mph on the backstretch of a track smaller than a basketball court. The whole lap could take, like, 12 seconds. And you’re just standing up there, controlling it with your fingers. This is way different than most motorsports, where you are shifting, and steering and dealing with g-forces. So with RC cars, you don’t really have a physical outlet for the red mist we all occasionally deal with. Which means you need to be able to put your head in a place that you can deal with the red mist in a way that literally has no physical way to let itself out. If you twitch while driving an RC car, it could literally go flying off the track.  Or at least run right into a wall. So, you have to get your head in to a space that you can manage your energy level, anxiety level and the red mist, and not have it affect your run. Which is something that is really important at all levels of motorsports.